We heard about Nasch’s recent opening in Los Gatos through the grapevine and wanted to check it out. After all, there aren’t too many places in the Bay Area that you’ll find authentic Austrian cuisine. As the more simple and casual sister to Naschmarkt in downtown Campbell, Nasch is the perfect place to go for a casual, satisfying meal. The restaurant is brightly lit with natural light and they serve all of the essentials: cold beer, schnitzel, and freshly made sausages.

We loved our meal there and were lucky enough to have the chance to learn more about the restaurant and the details behind our favorite dishes. 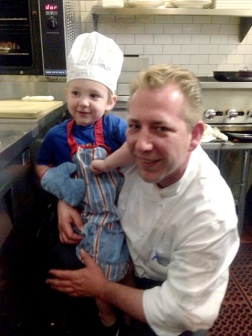 The owner and chef, 35 year old Matthias was born in Linz, Austria and was trained in Vienna. Growing up in the restaurant atmosphere all his life, he took his first job as a dishwasher and pantry cook at his uncle’s restaurant.  After apprenticeship in Linz and Vienna he decided to move to New York where he continued his cooking career and also met his wife Margaux. Since Margaux was born and raised in Los Gatos, she convinced Matthias to move to California where they opened their first restaurant Naschmarkt in 2011.  Building off the success of Naschmarkt, Matthias and Margaux opened Nasch with partner Humberto Ramirez in December 2015.  The menu was kept simple but the quality is still top of the line!

We started our meal off with some amazing sausages, beer, and a pretzel. The pretzel is made in house and served with a side of sweet Bavarian mustard. And of course we had to have our Das Boot full of Austrian beer to wash it all down.  Our favorite sausage was the käsekrainer, which is a pork sausage with cheese mixed into it- so good!  If you aren’t in to beer, try one of their Austrian sodas that can’t be found anywhere else in the Bay Area. 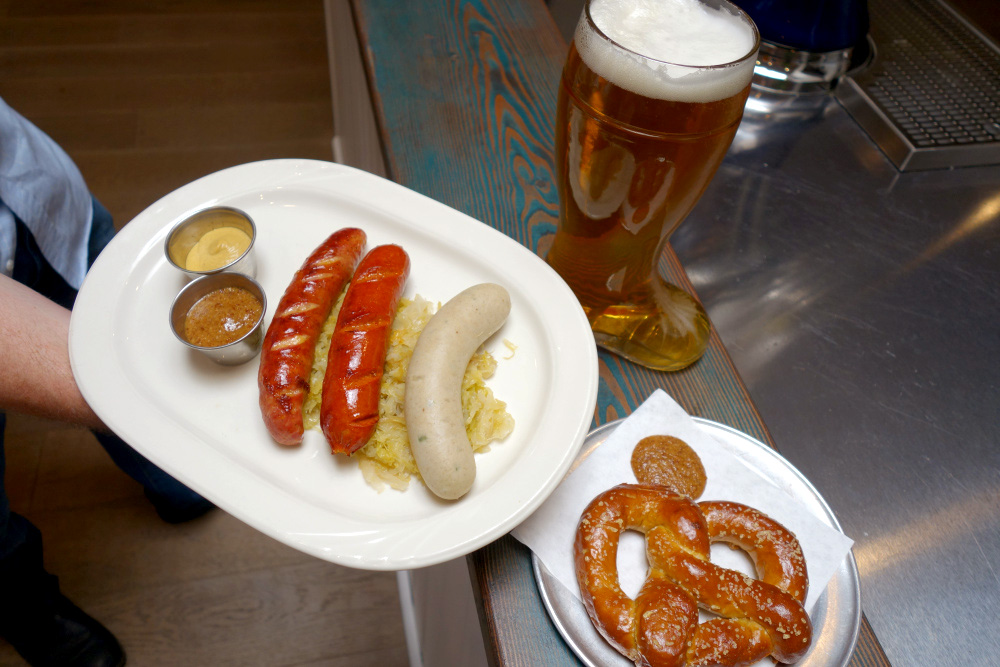 Onto the main courses! First up was the Käse Spätzle which is basically an Austrian version of mac and cheese.  Spätzle is a type of soft egg noodle that is commonly found in Austria and many surrounding countries.  It makes for a hearty meal–great for those with a big appetite! The spätzle comes with beer cheese, caramelized and cripsy onions, and an option to add on bacon or veggies. 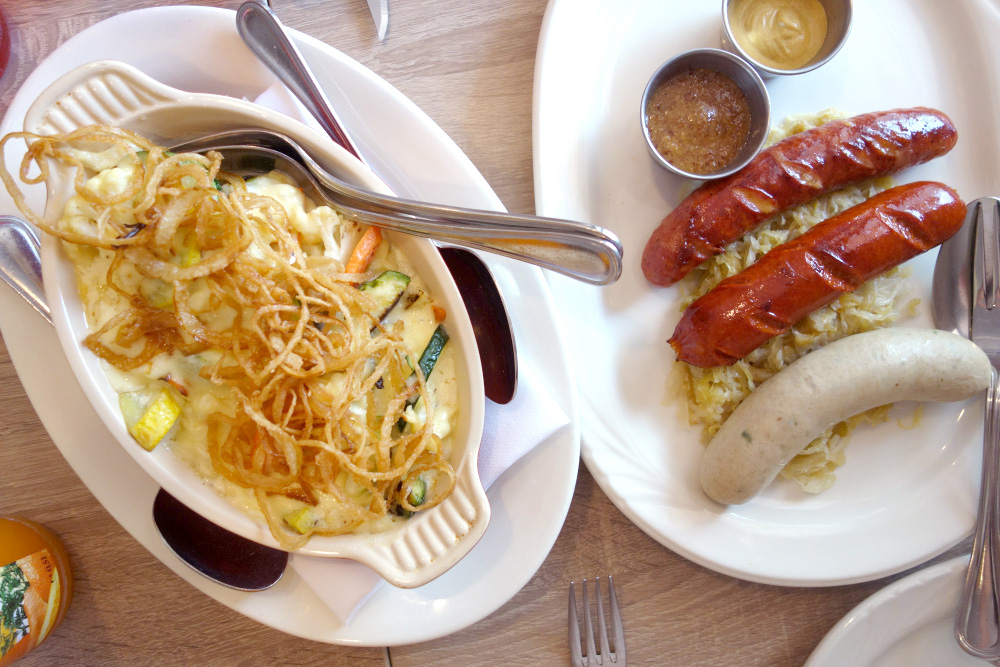 Next we tried out their Pork Wiener Schnitzel which is an Austrian staple. The schnitzel comes with the traditional side of lingonberries, lemon, and potato salad or fries. In our opinion the schnitzel was pretty spot on (we’ve had the real thing in Germany) and loved how the crust was thin and crunchy. 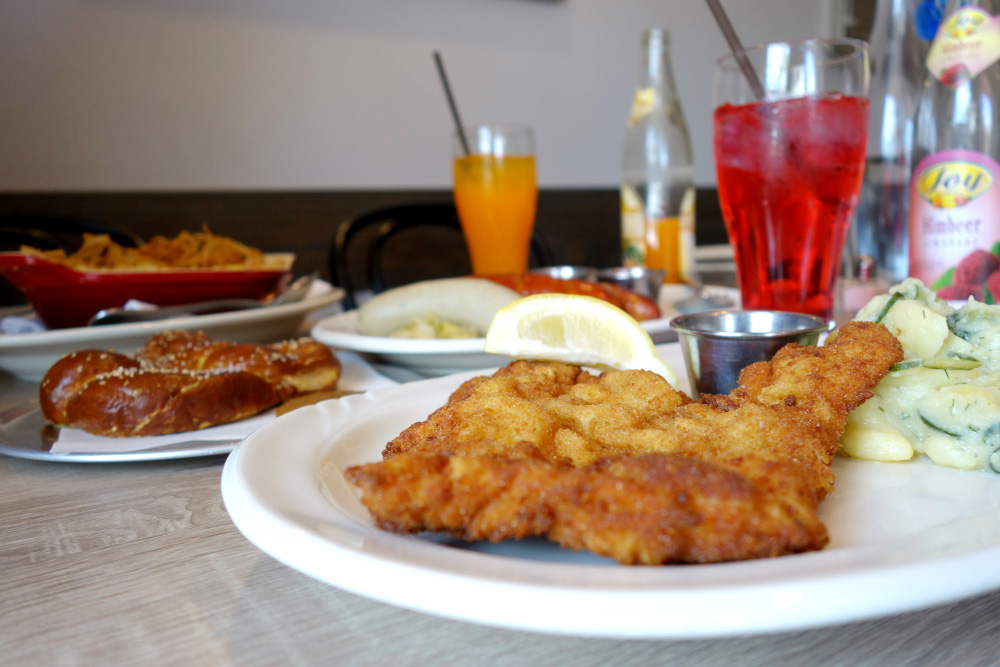 Last, but not least we have to give another shot out to the boot of beer (hands pictured to show proportion size). 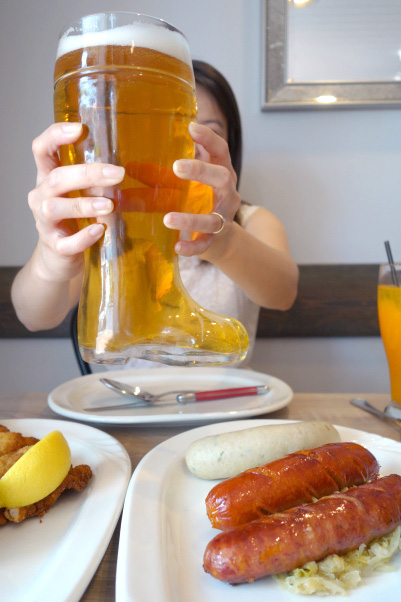 Nasch serves lunch 11:30am-2:00pm, and Dinner 5pm to 9:30pm, Tuesday through Saturday.  Grab some sausages and soda for lunch (or a beer if it’s “that kind of afternoon”) or come in for dinner and a boot in the evening!

Nasch is having a special $5 off boot promotion now through the end of May 2016!  The tough part is drinking it quickly enough before it becomes warm. Challenge accepted? Prost!

Nasch also caters and can accommodate any and all sized parties and also offers company or large party restaurant buyouts.  For more information and specials, follow them on Facebook and Instagram.