When most people think of Chinese food, images of Chow Mein and Sweet and Sour Pork come to mind.  But being one of the largest countries in the world, China’s food varies vastly from region to region. Sichuan and Tianjin, are some of our favorite Chinese cuisines and are a little less well known to many diners. Luckily, here in the Bay Area you can find an amazing restaurant that serves both!

A Brief Background to Sichuan and Tianjin

Sichuan is one of the biggest provinces in China, located in the Southwest region. It is known for beautiful scenery, pandas, and their infamous spicy food. Sichuan cuisine has a spiciness called “Ma La” with a direct translation to “numbing spice”!

Tianjin is a large city located near Beijing, China.  As a historical port for China, the cuisine has become a mixture of many provinces throughout China. The local flavor focuses on seafood and is generally characterized by being a bit salty with strong flavors.

Living in the San Francisco Bay Area, there are tons of choices if you want to go out for Chinese food. But if you want both Sichuan and Tianjin food, you’ll have to try out Golden Garlic! It’s a great choice for couples, families, and friends that have varying taste in food and spicy preferences. The owner, Eddie told us he decided to focus on Sichuan and Tianjin food because his wife loves spicy but he is unable to handle the heat. It’s a dilemma we can all relate to when dining out with groups. The mixture of the two cuisines is perfect to accommodate everyone. Eddie went on on to explain that the restaurant also focuses on fresh and clean ingredients and never uses MSG or canned goods. All flavors are natural.

The head chef at Golden Garlic comes from China, where he was Chef at 5 star restaurants. The quality and creativity of his cooking is evident in their dishes. The restaurant has several unique items we have not seen anywhere else. Below is a more in-depth explanation of some of the dishes we were lucky enough to try out. 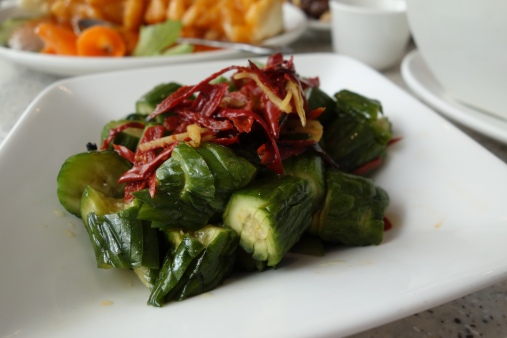 This dish can be found in many Chinese restaurants, but Golden Garlic has perfected a technique where they slice the cucumber a certain “fancy”  way so that each piece of cucumber stays intact even though its cut- giving each bite extra flavor. It’s lightly spiced so that everyone should be able to enjoy.

This was the spiciest dish we tried during our meal, but we couldn’t stop eating it! It’s fried to perfection. The chicken is very juicy, with the outside crisp capturing the spicy chili it was cooked with.  Make sure you eat this with rice or have a glass of water handy!

This dish is a lot less scary (spicy) than it looks.  One of our favorite dishes, the fish was clean and fresh and the noodles underneath were a perfect compliment to a scoop of rice.  We liked the sauce so much we took home the rest and cooked more fish with it! 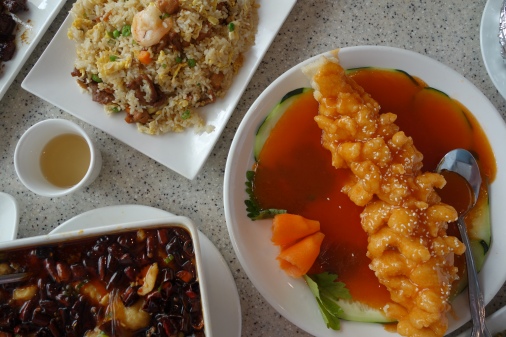 This dish doesn’t translate as well as it tastes.  It’s one of Golden Garlic’s Specialty items that we have never seen anywhere else. The fish is sliced in such a way that each piece is fried into its own little “ball” making it easy to eat and bone free. The tomato glaze gives the whole dish a sweet taste with a perfect crunchy crust. 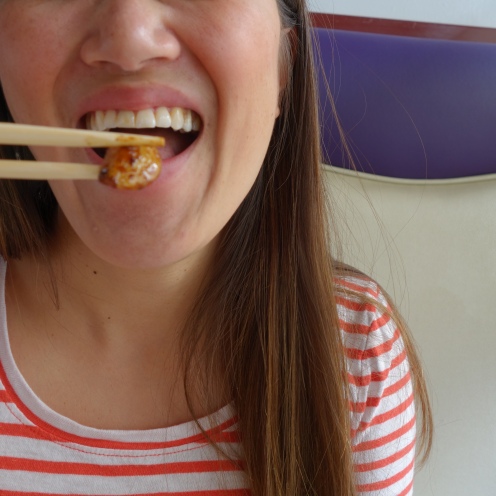 Last, but not least is Golden Garlic’s Signature menu item. This dish certainly lives up to its title. The beef is filet mignon and super tender. The chef told us that the garlic cloves were cooked in such a way so your breath won’t stink (like garlic) after you eat them. We tested this out for ourselves and its true!  It gave us even more reason to stuff ourselves to the brim!

If you live in the South Bay Area, you’ll have to try out Golden Garlic. They have two locations, one in Milpitas, and one in San Jose. The San Jose location just opened last year and is even large enough for parties and events. Have you ever tried Sichuan and/or Tianjin cuisine? Let us know your favorite dishes in the comments!